I spent a week of my time now on Upwork, and first impressions are that this is a good way to cushion income and make sure that as a freelancer I stay busy when my main clients are not available for projects. I have been able to process around four clients in this time for about $600 total. That is not very much but it seems like if that trend continues then the possibility for an increase in earning is definitely an option.

I must admit it is a little annoying knowing that I have to take less value for work then I would like to in order to get the contract and compete with the digital market on this website, but nothing in the freelance world is easy and I am appreciating the chance to test my skills in varying fields of expertise (not to mention time/business management). If anyone is considering using a website like this I would recommend at least giving it a shot, if anything it stops you from sitting around doing nothing! Hopefully some of the contact that have been established will become someone who comes back to me for other work that they may have in the future, which would make this whole experiment worth it in the long run.

Now what is kinda not all clouds with silver lining would be the fact that according to their statistics system my percentage for jobs hired vs jobs I have showed interest in is absolutely maxed out for other freelances in my industry. That means I am presenting myself in a very successful manor or I am getting lucky as hell, and for someone who does not get as much of a hired turn around this whole process could seem useless or like a waste of time. If that is the case I would recommend changing your approach for showing interest in the project and remember that you are interviewing the client as much as they are you. If its not a good match, move on if it is make sure you demonstrate you have the knowledge to make the clients life as easy as possible, you are supposed to be the expert present it like you are!

All in all, I will continue to use their service and may go on to pay for the membership (which is kinda whack considering they take 20% of all my income through them already) I will just have to see its cost effectiveness and if it changes the amount of jobs I am able to contact to each month. If you are wondering if its worth it, well that’s completely up to you and what your getting out of it… I consider it time well spent instead of time wasted.

I did this as a quick physics demonstration when asked how to do simple target tracking! Its a little broken on the new site, but if you want a better version of it head to https://pryme8.github.io/BudoBalls/

We were out on the town having fun, walked into the restroom and saw the contrast so I had to record something. Explained the premise to my wonderful lady lover who promptly after about 10 seconds of explanation went into the females room and grabbed me the content I needed for that one! Was able to record, edit and get the original music produced for this with extremely fast turn around about 2.5 hours including the render time for all elements to be done.

I had to retopologize a whole city for a client one time, it was pretty intense! Here is just a segment of those buildings:

Here is a development log of trying to make a universal intensive operation timer. This is all pretty much off the top of my head. I’ll be making notes on here as localhost development proceeds throughout the day.

Step 1
Setting up our prototype object

Right away I start by defining a global scoped function that will be the instance of our timer when ever we need it. It is done this way so that we can have multiple instances of the same timer running on other objects on our page. Elements like canvas/dom animations, continuous polling events to the server, and other functions can be controlled from this object.

If we were to run this script on a page our console would just output the uIO object that was just created which is nothing fancy right now, but at least some sort of framework we can start building up is there!  What we need to do now is start the timeout loop and start having this “intensive operation” timer start doing something.

Now we have something, with the additions just made the timer should now be able to run at a close to set amount and have a delta variable available to us.
This will be the core of the system for timing. The ext steps will be to include a callback that is interchangeable for the object to run when ever the _RUN function has fired.

What can we do with this new Object now? The first thing that comes to my mind is animations on a canvas element, or physic calculations that require a time step. In order to see if things are running according to principle I will take the new object and firstly have it output to a canvas element, and then refine the output to several different timing functions that can change the motion of an object or shape on the canvas. I am thinking the smartest way to do this for right now, will be include a new Object type under the scope of the uIO Object that will function as a debug output.

When starting these changes the first thing I want to do is go back to the uIO objects _init function and add “this._debugOn = false;”, so that there is a flag in the parent object for later use. Next I set up a new Object type:

What was added was first a prototype of the uIO object which will control the parenting chain of the objects. In theory you could call the DEBUG object manually but this just keeps things tidy. Next the actual sub Object this is another function that now holds some information for our output canvas and a prototype method to make sure that the canvas has a resize function which I will later tie into a window resize event. 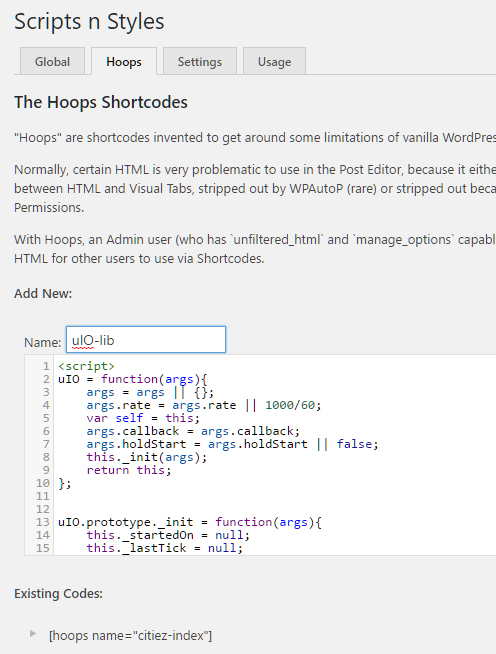 The thing that needs to happen now though, as the project is progressing because this is specifically for the purpose of documenting the development and demonstrating it on my website (which is powered by WordPress), I will need to start making changes to prepare my post to display these debug objects, and have access to the newly created uIO. In order to “hook” into the post with my own JavaScript Libraries fast and with the ability to update the script globally but choose which pages are even accessing the content I use the Scripts-n-Styles Plugin. This is a great plugin with “The Hoop’s” shortcodes it provides access to. After pasting the script into this section of the plugin it created me a shortcode [hoops name=”uIO-lib”], which I can now include in pages, or posts on my WP site. The technique I will use to access this can be directly on the post elements html or through another hooped shortcode that has a script that fires after the creation of the page, in order to ensure that all DOM content is accessible at the time of the creation of the uIO Object.

On my wordpress post, for example this one I need to create a target for the output canvas to go to otherwise it will default target the body of the document which is not the desired effect at this current moment for example:

And if everything is going according to plan, you should see such container div above now, though nothing is outputting to it. Development at this point becomes a little bit different. What I am going to do is first modify my localhost page to kinda simulate the elements and situation that I am trying to accomplish on the publicly hosted version which makes it look like the following. 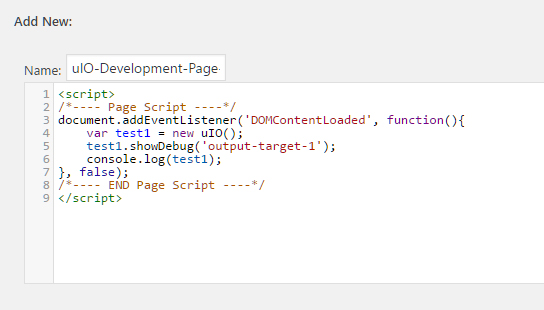 By the way if anyone reading this is wondering how I am outputting the code without it running on the post simply wrap any section like that in <pre> for just JS code and then <pre><xmp> for anything that has HTML elements as well. Some styling will be needed to display that correctly but just a little tidbit if you were wondering. Now I need to update the script on the WP side so I go back to my Scripts and Style Admin section, and make the appropriate changes. I also have to create a new Hoop for the section that will interact with this specific page, like I said earlier this can be inline, but for ease of access I prefer to hook it in.

Time to give all this a shot, by now placing the Hoops on this post, and making sure that the element it is looking for in our Development page hook is available for it!

By the looks of it things are going well, I now have a small box that is displaying the fps, this can later be extended to do more but for now here we go. Now its time to create a new Object type that will be for drawing different variations of timing equations and different visualization based on what ever variables from the uIO objects timings. **The one thing I am noticing at this time is that on my system its saying 50fps and holding that pretty true, that is honestly wrong and I will have to go back to figure out if its the output or my actual frames/rate that is incorrect for now well just move on as this is a merely just a demonstration. If this we going to be a refined library this would need to be debugged at some point!

Now that there is a Object that is generating both a tick time and a delta time, we can start doing some more advance testing. In addition after just implementing a basic canvas and drawing to it the dynamically changing fps variable I now have the option to create a new Object type for handling equations in the form of nested functions. This Object, will have a uIO object that is a child of itself and will be accessed by the uIO child in order to fire off its draw event or will create a uIO object with an assigned callback for accessing the parent Objects draw function… I know that might sound complicated but stick with me. For the time being, I am going back to localhost development in these next explanations.

With these changes now on the local client things are starting to take shape. I had to make quite a bit of modification to the sections of the code, lets review the updates.

Now tomorrow, I will clean up the display of the visualizer and make it more dynamic and also work out some more timing equations!
To be Continued…

Das_Noise was a project I started for procedural generation of noise through a native JavaScript library. It includes most standard noises and there are version floating around that I did with some odd ones as well. This should be the stable version on my github, if not then I will be fixing that momentary because I want to do a few experiments with it coming up soon.

If you use it please put this in the script somewhere:

Did this here and there over the last day or so… Trapcode only on a slight animation effect. Original Music produced for it could be better but it was rushed.